A few weeks ago, Tom and I attended an event at the Kennedy School that continues to replay in my thoughts.

Larry Summers, Director of the National Economic Council under President Obama, and David Gergen, Communications Director for the Reagan White House, sat down to discuss the “State of the Economy“. A video of the conversation will show you that Tom and I sat on the front row. But more importantly, I left reflecting on their words and making connections with books I’ve read, class discussions and my 26 years in the South.

A Side Note: Story Time With Larry Summers

If you can’t watch the entire talk, I would recommend at least watching the first 10 minutes. Gergen and Summers reminisce on the first time they met … During the Reagan Administration, a 28-year-old Summers traveled to D.C. to serve as an economic adviser to Ronald Reagan. David Gergen, in a communications role for the administration, oversaw a group of economic wonks as they developed talking points for a pesidential speech on the economy. Gergen is forced to nudge Summers and the other economists from talking about “inflation with regression analyses”, to “bar graphs”, to (finally) a simple line chart. Larry Summers tentatively agrees to a simple graph if Reagan will say it was calculated through a “moving average filter”. An exasperated Gergen responds: “Larry, the President of the United States  is not going to use the term ‘moving average filter’ in his five minute address.”

Summers notes that it was an important contribution to his political education, and he has been learning from Gergen ever since. For any policy wonk or person that deals with policy wonks, you know this story is symbolic of too many messaging interactions. For any person that doesn’t fit into these categories, you now think I have a terrible sense of humor. Both are accurate.

Summers on the Changing US and International Economies:

Moving on… my education from Larry Summers started with this discussion. He spoke on the weak economic recovery after both the 2001 and 2007 economic downturns. These weak recoveries are something many of the us in the advocacy community have been writing about often over the last few years because of the effects on working, low-income families. Summers also reflected on the changing nature of the U.S. economy. Where the transition was once from agriculture to manufacturing, today a major economic concern is the loss of the U.S. manufacturing base.

However, Summers pointed out that the manufacturing decline, while more severe in the U.S., is also true in places Americans might not expect. Like China. China’s manufacturing employment peaked in 2006.  I had not known that Chinese manufacturing employment was on the down slope. However, I have often heard  of the significant gap in labor costs between the U.S. and China. The link above takes you to a report showing that “Chinese hourly labor compensation costs in manufacturing were roughly 4 percent of those in the United States and about 3 percent of those in the [European Union] in 2008.”

Summers used Chinese employment to underscore that the U.S. isn’t alone in declining manufacturing employment (though in the. He compares the shift away from U.S. manufacturing jobs today to the shift away from agriculture as a dominate industry in the early 1900s. One of the things I valued most about Summers comments was his ability to take Gergen’s questions about today’s economic trends and couch them in previous shifts we’ve experienced as a nation. For the many students and younger audience members in the room (including me), these connections are exceptionally helpful and served as a reminder to look to the past for examples of how to support working Americans through large economic transitions.

Summers Remarks on Manufacturing and The Unwinding

Manufacturing employment is down relative to a decade ago all across the nation. Both North Carolina and Mississippi, two states in which I lived, are still grappling with the loss of manufacturing jobs and searching for ways to rebuild the sector. Initiatives like the Department of Labor’s Trade Adjustment Assistance have emerged to help communities and workers cope with the loss of their jobs and equip themselves with new skills.

One of the most compelling pieces of writing I’ve seen on how the loss of manufacturing jobs exposes communities is The Unwinding, by George Packer. Packer’s National Book Award winning work carves out the stories of several Americans and their changing work, personal lives, and communities from the 1980s to 2010s.

The story of my favorite character, Tammy Thomas, starts when she is a teen growing up in Youngstown, Ohio. Tammy takes on work in the manufacturing sector at an early age after being raised by her grandmother in what was a then a stable Youngstown suburb. Packer follows Tammy’s story through having children, moving between manufacturing jobs, declining wages, eroding benefits and ultimately unemployment. Located in the heart of the Rust Belt, Youngstown lost tens of thousands of manufacturing jobs in the 1980s and with them, the city’s tax base, property values and resources for infrastructure upkeep. Tammy’s story shows how one young woman endures the harsh transitions in a city ravaged by manufacturing loss. However, her story takes a hopeful turn –for both herself and her children.

I would strongly encourage people to read The Unwinding. Packer does an exceptional job of taking the ups and downs of individual’s lives and braiding them into the broader trajectory of our nation’s economy, political and social systems. If you live in Cambridge, I might even loan you my copy.

I left the Summers’ discussion with more questions than answers. How do we prepare ourselves, working adults and younger students for the always changing nature of our world’s job markets? As an HKS student with the opportunity to reflect on these challenges, what’s the best way to get the most out of  our time here? Should we all drop coursework at the School of Government and run for the Computer Science Department and STEM fields? (Kidding.) Gergen and Summers both ended the discussion with the message that the hope for solving complicated challenges comes from those with lower ages than their own. Those solutions aren’t coming from me (yet). But I do think the challenge for all of us is to reflect on the insights of these thought leaders and meld their insights with our lived experiences. Then we might have a shot at solving some problems.

So let’s get to solvin’.

PS- As a member of the Tarheel nation, I’m obligated to announce that last week UNC beat Duke. Tom and I celebrated. And made our poodle miserable in the process. 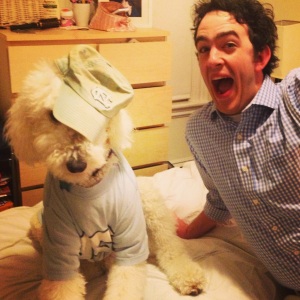