I considered naming this post ‘On New Beginnings’, but I started classes this week and received a long lecture in my American Politics course on writing concisely from Thomas Patterson. He pointed to several examples redundancy:

The real truth is that when I personally reviewed my own writing the end result often included the phrases he mentioned. So now I have Professor Patterson’s voice echoing when I consider blog titles. (As if I didn’t already have enough voices in my head) American Politics is just one of the five classes I started this week at the Kennedy School. The semester began with a bang with discussions on the Move On Effect, drones, ethics and taxing corporate bonuses.

This will be the second semester I take a course with Nicco Mele . This semester’s course focuses on using the internet in political and advocacy campaigns. Nicco works full-time outside of the Kennedy School and still finds the time to teach a course each semester. The class provides a great opportunity to learn from a practitioner in the field in the midst of all things academia. His class last semester also forced me to start this blog, so obviously I’m a bit hooked on the subject matter.

The first days of a semester are chaotic at HKS. Students are trying to determine their classes. They register, then bid points for classes, then register again if they don’t win their bids. Last night a student shared she ran to ten different classes this week because she was unsure which she would ultimately get in… an extreme example for sure, but I was tired just hearing her explain the dilemma.

In FAR more exciting news, this week also marked the beginning of Tom’s job at Full Contact, an advertising agency in downtown Boston. Before Tom started, I was already hooked on their campaign for Boston.com. Their “For Locals, By Locals” campaign takes ordinary Boston events but flips them with out of the ordinary outcomes. My favorite TV ad features a Boston man shoveling snow out of his parking space and then giving it away to a random car passing. Check the videos out. They will certainly make you laugh and give you a sense for the awesome creative 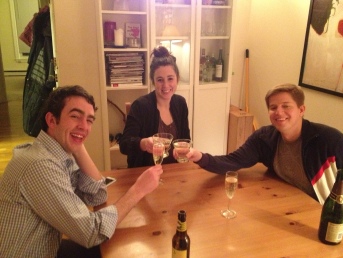 environment Tom joined this week. He will work on strategy and new business development and is really excited for the opportunity. I, however, am less excited that I now have to do half the dishes.

To celebrate his first day we had a scrumptious dinner with Nick and Becca and a well deserved champagne toast!

Finally, 2014 brought some exciting contributions from my work with the Harvard Kennedy School Review – a policy journal and blog by HKS students. Our team put together a series of posts that featured policy predictions for Tuesday’s State of the Union address. Eight students shared their perspectives on K-12 education, higher education, military affairs, the environment… and the list goes on. I was really proud that the KSR engaged so many student voices and published a series of great posts. We also live tweeted the State of the Union which for normal humans sounds completely dull, but for policy wonks is the twitter opportunity of the year! Kidding…kinda. If you would like to see some of the work of HKS students, I’d highly recommend taking a look! It is a strong start for the Kennedy School Review which I hope we can continue throughout 2014.

And of course not all things in our lives are new. The dog park adventures remain, and this week Charlie’s new bestie became a Wheaten Terrier as you will see below. 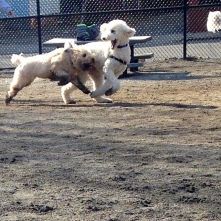 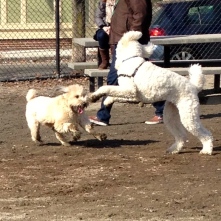